Creation or Evolution is reasonably priced and will stretch your child’s faith in the written Word of God. It encourages confidence when facing a world hostile to its message. [Read more…] 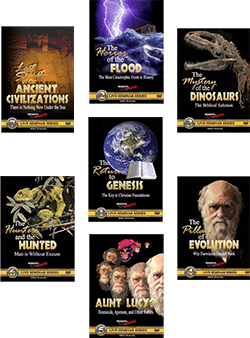 Mike Snavely and Mission Imperative created 7 Live Seminar Creation or Evolution DVDs that will help your students as they study creation versus evolution. See the review of the Live Seminar Series DVDs.

One of the most important goals of a Christian homeschool science curriculum is to teach creation science from a Biblical perspective.

The Creation or Evolution Home-Study Curriculum Bundle includes one of each of the following items.

Creation or Evolution covers the answers to questions such as:

This third edition has a new cover. Minor changes were made to the text. It has the same content.

Creation or Evolution Workbook and Tests

Creation or Evolution Workbook and Tests comes in soft cover and is about 8 1/2″ by 11″ with 48 pages.

This is a consumable, non-reproducible student workbook and tests.  Though out of print, we still have print copies available while they last.

Note: The Creation or Evolution Text does include the work pages and tests. Purchase this workbook if you don’t want to make copies or have more than one student.

EmailSMSRedditTelegramPinterest
Scroll to Top
We use cookies to ensure that we give you the best experience on our website. If you continue to use this site we will assume that you are happy with it.OkNoRead more