Join Princess Jondalyn, Talimar, and a flying horse on their adventures.

Buy the Kindle version of Beyond the Gloesmur at Amazon.com.

Beyond the Gloesmur was written and illustrated by Kathleen E. Deisher.

This is a wonderful book for reading aloud to the whole family.  It is a juvenile allegory adventure book (the same category as the books in the Chronicles of Narnia series.)  Reading Level:  Upper elementary to adult.

Note:  This is a high-interest level book that has been well received by reluctant readers!  Preteen boys appreciate it!  It makes a wonderful gift. 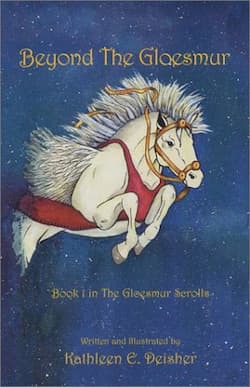 We have received many comments on this book from mothers of reluctant readers! They are excited because their ‘non-readers’ actually read the book straight through and then want to read the sequel!

Lovers of fantasy, adventure, and knightly derring-do will find in Beyond the Gloesmur a delightful story without any of the graphic content that makes some modern-day books unsuitable for teens. Kathleen E. Deisher’s book deserves a place beside C. S. Lewis’ Narnia series and J. R. R. Tolkien’s imaginative tales. This account of Princess Jondalyn’s adventure is one to be read in the early teens and re-read as an adult.

Confined to her room as punishment for acting disrespectfully to the King, she is rescued by a flying horse who breaks through the Gloesmur (wall of glass) to take her into Nifelah, a land of beauty and strange loyalties. There she is befriended by a king, a stable boy, and others who are not impressed by her royal title, but include her as a partner in carrying out what seems to her a mysterious mission.

Flying–even talking–horses, gallant men, and a clever, friendly fox participate in Jondalyn’s adventure, and leave the reader eager to begin Book Two of The Gloesmur Scrolls, The Princess of Kafar, due to be released in the near future.

*Barbara M. Sutryn is the author of inspirational articles, poems, The Sign Painter (Tyndale House), and Heartstrings, A Biography of Wilmos Csehy.

Beyond the Gloesmur Book Review

Kathleen Deisher surely has an imagination. Just think, a story with flying horses that talk, some misshapen creatures who serve the evil Shed, a fox that seems to understand people and communicates by its actions, a spoiled princess, a couple of kings, a lord, a prince, and a stable boy and a variety of other characters. The setting is an alternative world with people who are normal humans along with a mix of some other folk and creatures. The Gloesmur itself is a mirror-like dividing wall between Glenora, the home of the spoiled princess, and the land beyond the Gloesmur.

It is the classic story of good versus evil, a mad king who is the tool of Shed, the seeming source of evil and the enemy of Iyashu, who is love itself. The mad king, Sildark, has it in mind to first conquer all the lands north of the Gloesmur and then go through the barrier and take over the rest of the world. He has read the old prophecies and found an item which he thinks will give him victory if it is handled in the right way. At the beginning of the book, things are going his way, and the good folks are gearing up for the conflict.

The spoiled princess, Jondalyn, is recruited to help foil this evil plan although she is rather clueless to begin with. As time goes on, she matures through a series of adventures and loses her selfish ways, which is nice and uplifting and comes about rather naturally through the course of the book. She and Talimar, the stable boy, are key players for the good guys along with a couple of flying horses, Aeroan and Chayiym. Thankfully the author provides a pronouncing glossary and gazetteer at the back of the book for these different names. Right in the front of the book, the author has a map of the lands beyond the Gloesmur. This allows you to keep track of where the action is taking place. Both are handy, and you will refer to them when you read the book. Mrs. Deisher illustrates her own work, and her pen and ink drawings are a nice addition, especially the maps.

The story flows along rather nicely. There are no real dead spots. In the beginning the author tells about the two main characters and explains their actions a bit overmuch in my opinion, but that soon gives way to a smoother style once the basic characteristics are established. Jondalyn and Talimar have their difficulties relating to one another many times although it is obvious they do have some affection for each other. One character I particularly liked was Nimreu; he doesn’t stand for foolishness and is a great addition with his knowledge and skills to the group as they go about their adventure.

The plot has its twists and turns with some unexpected events. That always makes for good reading. The surprises are woven in nicely and ultimately explained by future events or in couple of cases by some characters telling others about what went on and why. Those explanations occur naturally and don’t really interrupt the story. The story reminds me of the journey from innocence through experience to maturity. Jondalyn grows up along the way much as Tom Jones did in Fielding’s old novel about a boy becoming a man. It is a well-used formula, and it fits this book well.

Who should read this book? Anyone who likes a fantasy setting mixed with adventure and action, some growth in the main characters, a bit of a love story hinted at, and good subduing evil for the time being. The combination works in this one. Yes, there is a sequel, The Princess of Kafar, but I’ve yet to read it. Enjoy!

*Frode Jensen, the author of Format Writing, Jensen’s Punctuation, and more, was one of the first to write English curriculum for homeschoolers. Mr. Jensen has an informative website that you can visit for more information about his curriculum and teaching English in homeschools, Christian schools, and private schools.